Overview of the Buildings of Warpath.

Buildings make up the functions of any commander's camp. A camp can consist of a Command Center, Research Center, Factory, up to five separate Barracks, and an Airport. These buildings serve several purposes from holding units and assigning officers, to the research and development of industry and techniques and as of patch 2.00, commander level is now entirely determined by the level of the Command Center. Prior to this patch, constructing any building upgrades would increase commander EXP and was the sole way to increase the commander level.

The entire base received a major overhaul in Warpath patch 3.00, here are most of the changes to buildings: 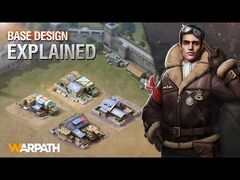 The main building of any camp. The Central Command serves as the main command to order Officers and Units. Central Command can also request airdrop supplies, garrisoning units, and relocation of the entire camp should the need arise. The higher your Central Command is in your camp the higher level you can upgrade the other buildings within your camp.

This building researches all innovations into the weaponization of mid-century marvels of technology and techniques. The research center can also combine unused low level units into a more powerful units also known as assemble.

Labor is important for the success of any war effort, and workers here are kept on a 7-day work schedule, day through night, to beat Raven. The factory is responsible for crafting the raw materials to construct or upgrade a building as well as the disassembly of unused tools into parts or unused units getting back Exp and bullets used to upgrade units.

Barracks house your units- soldiers, vehicles, or crewed weapons. Each barracks can house a single squad, and is commanded by one to two Officers. The amount of members in a unit is determined by the level of your barrack.

The airport is used for reconnaissance. A plane is sent out to clear foggy areas of the world map and locate Raven forces. As the structure increases in level, more scout planes can be sent out and gain speed.

Community content is available under CC-BY-SA unless otherwise noted.
Advertisement